When Jenny Cross (Chauntal Lewis) has to spend summer vacation with deadbeat dad (Stuart G. Bennett) on his creepy commune, she thinks clean living and boredom will kill her. But some fates are worse than death.

"It's been a dream of mine to make a psychological thriller that impinges a disturbing wallop on both sexes; movies like they made in the 1970s. It's a huge problem in our society that all women-centric films are now ghettoized as "chick flicks". Without practice empathizing with female characters in our media, men become less adroit at emphasizing with real women in their lives. I decided to make a male-genre-friendly feature film about a ripped from the headlines tale of ritualized sexual abuse, and use every tool filmmakers have to force empathy for the female protagonist while keeping the genre elements sensational and frightening enough that the film wouldn't be banned to Lifetime TV. Judging from the dazed look on audiences' faces and the critical reviews, The Commune team has succeeded in getting viewers to actually think about the female teenage victims of cults instead of sexualizing, objectifying, or dismissing them as mainstream media trains us to do." - E. Fies

The Commune screens on Friday, November 12, 7pm, at CAP Theatre in Sherman Oaks. Tickets are $10 and can be purchased here. 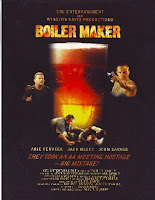 "I wrote Boiler Maker due to looking for a contained character-driven piece to direct.  Setting the hostage situation in an AA meeting appealed me since it was a unique world few ever get to see.  The eclectic group of characters there are already on edge battling personal demons, thus, heightening the drama and black comedy.  Filmgoers should see it because it’s powerful, well acted, life-confirming, and shows what can be achieved on a micro-budget." - P. Murray

Boiler Room screens on Saturday, November 13, at 2:30pm, at CAP Theatre in Sherman Oaks. Tickets are $10 and can be purchased here.


DRIVER'S ED MUTINY (Brad Hansen)
Driver's Ed Mutiny follows three teenagers who have to make their way from Chicago to Los Angeles, each for their own personal reasons. With no other options, they hijack their driver’s ed car and embark on a coming-of-age journey down the historic Route 66, with plenty of bumps along the way. 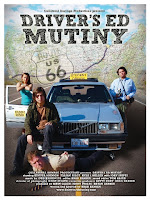 "I decided to make Driver's Ed Mutiny because John Hughes (who was still alive at the time) had stopped making movies.  Even worse, no one seemed interesting in making movies LIKE the eighties John Hughes films.  Nowadays most movies about teenagers are R-rated raunchy comedies that seem more interested in grossing the audience out than true character development, and there seemed to be a void of movies featuring teenagers dealing with real problems (but still told with a comedic vibe).  So I decided to make a modern-day John Hughes film, a sort of "Breakfast Club" on wheels.
I also wanted to challenge myself as a filmmaker and make an independent film that traveled across the nation.  We ended up shooting in 51 locations across 9 different states." -- B. Hansen

Driver's Ed Mutiny screens on Sunday, November 14, at 5pm, at CAP Theatre in Sherman Oaks. Tickets are $10 and can purchased here.
Posted by The Valley Film Festival at 10:53 PM