The 2010 Valley Film Festival presents documentary features on topics ranging from our forgotten heroes (Home from the War) to YouTube celebrities (Butterflies) and The Valley's other film industry (Paid for Pain: The Making of a Bondage Video).  VFF is proud to showcases the work of filmmakers all from the San Fernando Valley! Go (818)!

For this series of spotlights, we asked the filmmakers to tell us how they chose their subject and why it was important to share.

Butterflies deals with the fascinated culture of new media, specifically YouTube, and the young people who make a living by posting videos.

I discovered YouTube in 2006, when it was just starting, and thought it would be useful to post my film and editing work. While doing so, I noticed vloggers (people who film their lives and post videos). I became very interested in the subject when I noticed that these regular kids had a huge following and were being treated like celebrities by their fans/audience. Soon after, YouTube partnered with a few of the most watched video makers, by having ads running on their videos. I approached a few to see if they would be interested in talking about their unusual "jobs".  A few interviews turned into hours of footage because the behind the scenes story of "making it on YouTube and becoming a celebrity in this "virtual Hollywood" was way more interesting, and way more complicated than I ever imagined. So Butterflies was born, and with it your guide on how to become famous on the Internet.

I think this documentary is important for everyone to see as it deals with the newest cultural changes in our lives. Internet has become our everyday companion and, besides entertainment, it provides many new venues where we can feature our work, make connections (business/personal), network and make living. Everyone should be interested in this new community that completely changes the way we interact among each other and the way we lead our lives.

Butterflies screens on Saturday, November 13, at 7:00pm, at CAP Theatre in Sherman Oaks. Tickets are $10 and can be purchased here.


HOME FROM THE WAR: THE VOICES OF VIETNAM (Randall Wilson)

Home from the War is the history of the men and women who fought a brutal, unpopular war, fulfilling their duty to a country that treated them with disdain and indifference. In their words.

Home from the War screens on Sunday, November 14, at 2:30pm, at CAP Theatre in Sherman Oaks. Tickets are $10 and can be purchased here. 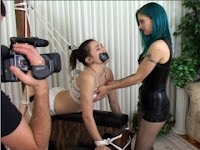 PAID FOR PAIN: THE MAKING OF A BONDAGE VIDEO (Jack Anthony)
Having lived in the San Fernando valley for more than 10 years, I have always been fascinated by the unique industry that exists here.  The world of adult video production seems to be both out in the open and, at the same time, a big secret.  In recent years, adult has gone mainstream.  Big porn stars appear on reality TV.  Showtime broadcasts the Adult Video  News awards, complete with red carpet coverage.  Yet, the day to day workings of the business remain hidden from most people.  I find it intriguing that, every day, huge numbers of regular people get up and go to work…the only thing that sets them apart is that their work consists of creating adult material. Sometimes the jobs people do could not be more unusual.  It is Sinn's job to endure pain.  It is Loren's job to inflict it.  And, of course, they both have to make it look good on video.  I think what makes "Paid for Pain" interesting is how casual and natural the situation feels.  It's like any other workplace.

Paid for Pain screens on Friday, November 12, at 10:00pm, at CAP Theatre in Sherman Oaks. Tickets are $10 and can be purchased here.
Posted by The Valley Film Festival at 11:49 PM