We proudly close the curtain on another great lineup of cinema so independent it can be found only in L.A.'s San Fernando Valley. This year, VFF screened over 50 thought provoking and entertaining films from 9 countries. Thanks to our volunteers, filmmakers, supporters, fans, and the Laemmle NoHo7 staff for making VFF16 rock!

Please take a moment to congratulate our 2016 award winners with us: 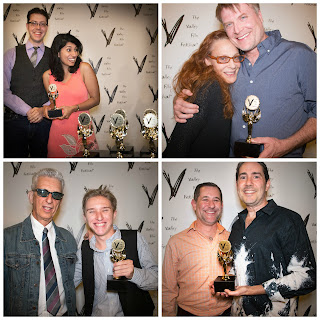 Posted by The Valley Film Festival at 7:31 PM No comments: 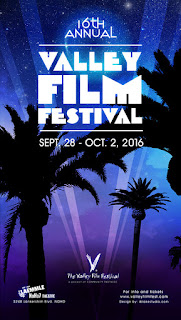 VFF returns in full force with a five-day festival showcasing over 50 of the best independent films, from the (818) and from around the world, September 28-October 2 at Laemmle NoHo7 in the NoHo Arts District. Tickets are $12 and available at ValleyFilmFest.com.

The Festival kicks off Opening Night, Wednesday, September 28, with the dramatic feature, A LIFE LIVED, the story of a single dollar and the many lives it passes along the way. Directed by Riley Wood and produced by Chris Cashman (VFF07, Carts) A Life Lived features Denise Richards (Wild Things, Love, Actually), Jennifer Taylor (Two and a Half Men), Brendan McCarthy (True Blood), Lili Bordan (Battle Star Galactica: Blood and Chrome) and Marshall Manesh (How I Met Your Mother, Pirates of the Caribbean: At World's End).

Currently nominated for an Emmy in the Outstanding Short Form Comedy or Drama Series category, HER STORY, Directed by Sydney Freeland, lights up the NoHo7 screen with the friendship of two trans women in Los Angeles who have given up on love, when chance encounters give them hope. Executive produced by Eve Ensler (“The Vagina Monologues”) and Katherine Fisher, the cast includes Jen Richards and Laura Zak.

The World Premiere of DRUGS & OTHER LOVE, Directed by Noah Applebaum, closes out The 2016 Valley Film Festival. In this comedy, a charming, terrible older sibling keeps his stoner brother high on drugs so he can win the heart of a lady dope dealer who happens to owe money to a gangster. Cast: Noah Applebaum (VFF12, Route 30, Too, VFF14, Route 30 Three!), John Weselcouch (The Purge), Angelina Spicer (Conan, Jimmy Kimmel Live), Whitney Moore (Birdemic: Shock and Terror, Birdemic 2: The Resurrection) and Teri Fruichantie (Hollywood is Hard).

The Documentary selections launch with an intimate oral history of the trials, tribulations, heartbreak and joy of bringing some of the most iconic and memorable motion pictures to the screen in IT’S ALWAYS ABOUT THE STORY: CONVERSATIONS WITH ALAN LADD, JR., Directed by Stanley Isaacs, featuring interviews with Alan Ladd, Jr., Jay Kanter, Michael Gruskoff and Mel Brooks. “The Creative Life” documentary program also includes FOSSE: RECREATED, Directed by Wolfgang Glattes (All That Jazz, Star 80, Willy Wonka & the Chocolate Factory) and #NONAHENDRYX: TRANSORMATION from VFF alumni and two time Emmy Award winners, Renee Sotile and Mary Jo Godges (VFF06, Christa McAuliffe: Reach for the Stars).

The Festival remains fully committed to supporting local independent production by showcasing twenty-six films made by Angelenos, Vals, and shot in or about the glamorous San Fernando Valley, while continuing to promote diverse films from around the world, with shorts from Canada (Chaos Management, Flush, The Silence), France (West Empire), Germany (Chamber Music), Italy (Black Comedy), Kazakhstan (The Sky Over Berlin of my Childhood), Korea (I Am Grace), Serbia (Play!), Switzerland (Stories Upon Your Lips) and the United Kingdom (Dead Fred, I Used to be Famous).

CHANGEOVER/U.S.A./Los Angeles Premiere (Director Estes Tarver) - After Haley suffers the loss of her parents in a fatal car wreck, she moves in with her almost estranged single uncle and his young son. Together the trio must attempt to move on and make a life as a new family. Cast: Madeline Taylor (John Adams, The Girl Next Door), Estes Tarver (Under the Dome, Finding Carter) and Carter Godwin (Solace).

THE RICH WOMAN/Vietnam/World Premiere (Director: Le-Van Kiet) – When an international business owner informs authorities that her partner has criminal ties, she is forced to face her enemy to save her daughter. Cast: Nguyen Cao Ky Duyen, Truong Quynh Anh and Quang Su.

VIRTUAL REVOLUTION/U.S.A./France (Director: Guy-Roger Duvert) – The year is 2047 and most of the population spends their time online, connected into virtual worlds where they can fulfill all of their fantasies, losing all interest for reality and leaving it to a small minority. A shadow Agent is tracking and eliminating terrorists who want to destroy this system. Cast: Mike Dopud (Stargate Atlantis, Stargate Universe, 300) and Jane Badler (V).

THE BUSINESS OF NOSTALGIA/U.S.A./Los Angeles Premiere (Directed by Mark DiNatale) – This documentary offers a glimpse into eleven business owners who own, operate, or create something that harkens back to a previous era.

The Valley Film Festival 2016 will open on Wednesday, September 28 and continue through Sunday, October 2 with daily screenings at the Laemmle NoHo 7, located at 5240 Lankershim Blvd. in North Hollywood. Tickets are $12. For more information and tickets, visit ValleyFilmFest.com. 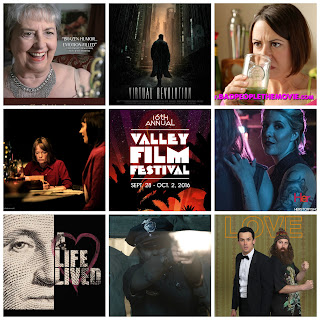 SATURDAY – 10/1
12:00 pm/noon – “The Creative Life” Documentary Program: It’s Always About the Story: Conversations with Alan Ladd, Jr. with Fosse: Recreated and #NonaHendryx Transformation
2:00pm – Feature Program: Changeover with I Am Grace
4:30pm – “The Past is Present, and for Sale” Documentary Program: The Business of Nostalgia with Dockery & Son
6:30pm – Feature Program: The Rich Woman with Boxer and Chaos Management
9:00pm – Centerpiece Screening: Badsville with Black Comedy and Caihong City (trailer)

Posted by The Valley Film Festival at 3:18 PM 4 comments: