It seems like only yesterday we started the "T-Minus 100 Days" countdown, yet here we are with our 11th annual showcase less than two weeks away. This weekend alone we have a to-do list of 61 action-required items. You may think we're joking, but we're not.  Seriously. By Sunday night, we need every item on the list checked-off as completed or to be completed by November 1st.

Our main focus this weekend has been on the technical side of our upcoming screenings. We've reassigned the team lead and the wheels are in motion, with a contingency plan in place.  We can exhale now.

Another big rock for us this week is our print deadline! Almost forgot about it. Our creative edits have been submitted for the artwork and we've asked all sub-committee coordinators to get us the names of their volunteers for the program.

What else can we can share? Oh, ticket sales! They're in full swing right now and we're very happy to report that our final screening, Bad Actress, is almost sold out. As of this morning, we had 20 tickets left. Get 'em while you can. And if you follow us on Twitter, you may see an opportunity come up for some free tix. Just sayin'...

The usual updates to the website and a list of social media outlets is also on the to-do, including MySpace. Really! Don't judge.

The longest section of the list is devoted to special events, including our filmmaker party, opening night event, after-hours parties, panels, food trucks, in-kind donations, booze, and more parties!  We think we have our bases covered but if you have an idea, please chime in. 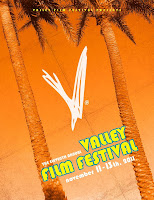 We are now ready to announce our eleventh annual lineup of cinema so independent it can be found only in L.A.’s San Fernando Valley!


With over 30 films on our program, including eighteen premieres and five foreign films, the VFF continues to showcase independent cinema from around the Valley and the world.  Our selections include a range of short and feature-length films, both documentaries and fiction.  VFF Founder and Director, Tracey Adlai, says that this was “by far the most competitive year, making our selections that much harder.  We wish we could screen everything.”

The VFF continues to promote local independent production, with over fifteen films made by San Fernando Valley residents and/or in the Valley or about it.  Filmed in Van Nuys, FEW OPTIONS, an L.A. premiere directed by George Pappy, is a gritty drama starring Kenny Johnson (“The Shield,” “Sons of Anarchy”) as an ex-con starting over with everything against him.  FEW OPTIONS also features Erin Daniels (“The L Word”) and Rainn Wilson (“The Office”).

The Festival’s documentary showcase includes the L.A. premiere of RATS & BULLIES, the powerful story of fourteen-year old Dawn-Marie Wesley, who, after being repeatedly bullied and receiving death threats at school, hung herself with her dog’s leash. Filmed in Canada and the U.S., this film documents the horrifying incident that outraged a nation and led to a groundbreaking court case in which, for the first time in North America, teens stood trial for bullying.  Also featured is Alexia Anastasio’s ADVENTURES IN PLYMPTOONS!, a profile of animator Bill Plympton.

The “Girls on Film” program of short films includes the U.S. premiere of THE SAFEST PLACE FOR FRUIT IS IN CARMEN MIRANDA’S HAT, a comedy about not fitting in with society’s expectations, directed by Kal Bonner.

Formerly known as (818), the VFF11 closing night feature, BAD ACTRESS, directed by Robert Lee King (“Psycho Beach Party”), is a dark comedy starring Beth Broderick (“Sabrina, the Teenage Witch,” “Lost”) as a has-been TV star living in The Valley.  Her career is revived when she’s accused of killing her husband, played by Chris Mulkey (“Saving Grace,” “Twin Peaks”).  The VFF has paired this film with THE POTENTIAL WIVES OF NORMAN MAO, a comedy short directed by Derek Nguyen and narrated by George Takei (“Star Trek”).

In addition to screenings, we provide educational panels, social mixers, and awards.  The juried "Ten Degrees Hotter" award is for one short and one feature from a competitive section.  Additionally, there is an award for short films, in the non-competitive section, as chosen by the audience.

Tracey Adlai says that she is “excited to return to Sherman Oaks” for three days, beginning November 11th, at the Whitefire Theatre, located at 13500 Ventura Blvd., in the Restaurant Row District.  Tickets are $10-$15.

9:30 pm – Feature Program: We Gotta Get Buscemi with Public Museum


For more information and tickets, visit www.ValleyFilmFest.com.
Posted by VFF Editor at 4:13 PM No comments:

We're updating our website to reflect the awesome programming we have lined up next month, and we're not quite ready to unveil it.  In the meantime, we thought we'd get you excited for the 2011 Valley Film Festival by giving you a sneak preview of our short films...from A to Z. 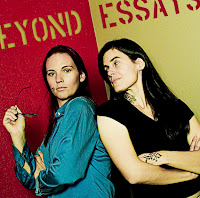 12 HOURS (Director, Ester Brym)
Originally shot for Ridley Scott's "Life in a Day," the global experiment to create the world's largest user-generated feature film, Ester Brym (VFF10 Butterflies) returns to VFF with 12 HOURS, the story of one girl's day and what happens when you walk a small dog in a big city.

52 SECONDS (Director, Lauren Nadler)
Sometimes it takes less then a minute to know...52 SECONDS stars Zaki Rubenstein as a woman who imagines an entire relationship with a stranger, while on the train.

BEYOND ESSAYS (Director, Jules Dameron)
We first met filmmaker Jules Dameron on Twitter (@JulesDameron) promoting the VFF10 film Deaf Perception. Earlier this year, we had a chance to learn more about her organization, Deaf Women in Film, and are thrilled to screen her ASL short about a student and teacher, each with their own agenda.

DESSERT & SUICIDE (Producer, Ashley Cozine)
We love it when filmmakers meet at VFF and collaborate together.  Producer, Ashley Cozine (VFF10 By the Numbers), and writer, Sahag Gureghian (VFF06 Madame Priscilla's /VFF08 The Birthday Gift), teamed up for this dark comedy about a blind date gone awry.

FISH! (Co-Director, Damian Samuels)
Making its West Coast Premiere at VFF, FISH! is a short comedy written and directed by Mark Eccleston and Damian Samuels about a chef with big dreams, a big fish, and an insatiable mermaid.

THE GRAN' SCAM OF THINGS (Director, Leor Baum)
We've all received a Nigerian scam email congratulating us on winning the local lottery or soliciting us to facilitate the move of millions from one bank account to another.  THE GRAN' SCAM OF THINGS explores what happens when an elderly woman opens an email that leads her into the welcoming arms of an international crime ring.

HOLD THE MAYO (Director, Jeffrey Williams)
A beleaguered sandwich store clerk's bad day gets worse when a customer returns to prove the adage, The Customer is Always Right.  In this case, horribly, horribly, right. (Coincidentally, HOLD THE MAYO features Damian Samuels of FISH! See above.)

THE HUNTER (Director, Jason Korsner)
When a radio phone-in dating-doctor finds that he has no date for Valentine's Day, he sets out to change that, using all the tips and advice he dishes out on air.  But when he tries to put his tricks-of-the-trade into action, he finds it's not so easy to practice what he preaches.

KISS (Director, Justin Zagri)
Shot in North Hollywood, KISS is the story of a naive young man who hires a lively prostitute to learn how to kiss.

THE LEAGUE OF S.T.E.A.M: ZED'S CLUTTER CALAMITY (Producer, Trip Hope)
Our favorite monster hunters from the Victorian era return to VFF!  If you enjoyed VFF10's Fool's Gold, you'll love Zombie Zed and his misadventures cleaning up the house.

LEGACY (Director, Jessica Ordonez)
After 20 years in prison, a young man is released and forced to confront the person who set him up...his own brother.  Made in the (818)!

LIVE FOR THE DAY (Producer, Ron Rogge)
Ron Rogge has had too many films in VFF for us to count!  This year, he brings us a drama based on a true story.  One of the last moments of life, given to inspire another to not just live for today, but also pursue those dreams without excuses, and Live for the Day!

MADE IN JAPAN (Director, Ciro Altabás)
Last year, he entertained us with A Practical Guide for Imaginary Friends, and this year, Ciro leads us on an unusual journey when his lead actor learns that his father is not his father.

METHOD ACTOR (Director, Justin Stokes)
A powerful short film presenting the monologue of a single actor (John Shrapnel).  Through his reminiscences, the audience gets an insight into a dark, confused and embittered mind.

MIND THE GAP (Director, Kristal Williams)
This dramatic short film follows 16-year old Sara as she grapples with her father's inadvertent involvement in a classmate's suicide.

MINE (Director, Greg Thompson)
Three friends abandon the city for a little vacation and soon draw the attention of an unwelcome stranger; a man who will teach them that in order to survive in the desert, one must follow the rules – his rules.  Greg Thompson last screened Down a Dark Road at VFF08!

MIRK RIDERS (Director, David Becker)
Seen through the eyes and memory of band leader, Eve, as she leads her band mates through the desert after their last show of their tour.  A car problem sends the band into an unwinding downward spiral.

MRS. CHRISTMAS (Producer, Brad Bucklin)
In this dark comedy, Alice and Jennifer, the "unofficial" welcome committee of Holyfield, drop in on new neighbor, Mary, to explain the established rules of the community.

OMERO BELLO-DI-NONNA (Producer, Blue Suede Shoots)
All the way from Italy, Omero is a grown up child living with his beloved grandmother.  His life takes place in a world of fantasies, heroes and magic creatures.  When his grandma suffers a diabetic attack, he is forced to get out of the apartment and face the outside dangers in order to call for help and save her.

THE POTENTIAL WIVES OF NORMAN MAO (Director, Derek Nguyen)
A quirky and heartwarming short film narrated by the legendary George Takei (Star Trek), Norman Mao is an overweight, and socially-awkward man-child from Hong Kong, who at the age of 33 is still unwed.  Desperate to get him married, his parents take him on an international junket across the globe to find him a worthy Chinese wife.

RED PRINCESS BLUES (Director, Alex Ferrari)
In this twisted modern day fairy tale, Zoe, a young teenage girl, is lured into an after hours carnival tent by the sleazy rock n roll carnie, Rimo.  It's up to the mysterious princess to pull young Zoe out of the wolf's den she has fallen into.

THE SAFEST PLACE FOR FRUIT IS IN CARMEN MIRANDA'S HAT (Director, Kal Bonner)
A quirky, narrated tale about the weak against the strong, the different against the 'norm' and the difficulties of not fitting in with society's expectations.

STALKED (Producer, Cindy Baer)
Cindy Baer was last seen at VFF08 in Morbid Curiosity and returns to the (818) with this thriller shot in the (212).

TWO BROKEN HEARTS (Director, Giannis Georgiou)
A black musical comedy about two lonely souls who meet in a train, have some drinks and decide to share a room. Then, everything goes wrong

Hey, don't forget to "like" us on Facebook, follow us on Twitter, and join us November 11-13, 2011 at the Whitefire Theatre in Sherman Oaks for some truly amazing indie film.
Posted by The Valley Film Festival at 1:29 AM No comments: