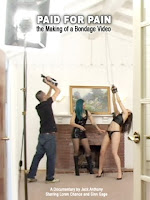 One highlight from the first day was the comedy short 52 Takes of the Same Thing, Then Boobs shown with the longer Paid for Pain. The former film used some creative visual techniques to playfully evoke lots of interesting questions about film and sexuality, while the latter was a bare-bones documentary full of answers (at least tentative ones) about film and sexuality.

52 Takes has dozens of shots of an attractive actress facing the camera and uttering the same hollow cliché about story being the most important aspect of filmmaking. Whether this is supposed to be for an audition or to practice a scene is unclear, but each time she utters the line an offscreen male voice (the implied director) then says, “OK, now show your boobs.” She begins to pull up her top, but the money shot is always denied in playful ways, like with her breasts being covered by graphics that are slang terms such as rack and jugs. Seeing this 52 times could become tedious, but the film uses various techniques to compensate, and we do eventually get the money shot. Still, the potential for tediousness may be part of what the film is evoking about sexuality in film—how some people can watch the same thing repeatedly and not get bored by it, while for others once can be enough. The relations between story and spectacle, the suspense that movies rely on, and the power relations between actors, filmmakers, and audiences are some other interesting topics that this film evokes.

In the end, while 52 Takes just hints at a lot of interesting ideas about film and sexuality, Paid for Pain plunges in. The format is very simple—it’s two women making an actual micro-budget bondage video and talking about various aspects of what it takes to make the video, and what it means to be in this line of work. The film takes place on set (actually, in a rented house somewhere in the San Fernando Valley), with the offscreen male voice of the director (of the documentary) asking various questions, which the women answer very directly and articulately. This is one of those documentaries that’s like turning over a rock and finding a whole complex universe of strange activity underneath. It presents what for most people is a totally alien subject in a matter-of-fact manner that is neither titillating nor clinical. Via these two women, the film explores various issues such as why some people like bondage, how they do it in film vs. real life, and whether women performers consider themselves to be exploited or empowered by their work. (One way they feel empowered is by simultaneously handling multiple aspects of the shoot itself, including performing, directing, doing costumes and makeup, and tying proper knots.) They also talk about how their work provides a healthy outlet for people who otherwise might engage in riskier behavior. Well, maybe. In any case, the women convey sophistication and a sense of humor about a mode of filmmaking and sexuality that tends to be perceived in the crudest and most moralistic terms.

Together, and from very different perspectives, these films suggested a lot about film and sexuality, and did it very well. They demonstrated an independent spirit in filmmaking, taking on their subjects in ways that were frank, multifaceted, and illuminating. Way to go, VFF. Keep it up.

By James Latham
Posted by VFF Editor at 7:29 AM