Doctor Zhivago Brings His Bolshevik Revolution to The Valley

In addition to independent cinema, The Valley Film Festival loves, loves, loves classic Hollywood films! Even those, actually made in Hollywood. We just can't get enough. And, when these classics return to the big screen for one-night engagements, being able to see them as they were intended, makes the experience that much richer.

Earlier this year The New York Times Film Club launched in both NYC and L.A., or, more accurately, The Valley! As their website states, "The NYT Film Club is membership-based club devoted to an audience that is passionate about movies." Memberships start at $100 and come with a load of benefits, including access to preview screenings and digitally restored classics fused with Intel technology. 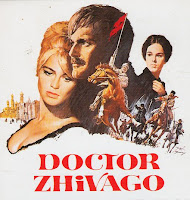 VFF is excited to share that this members-only club has extended an invite to VFF filmmakers, friends & fans, to attend their upcoming screening of the 1965 classic, Doctor Zhivago, starring Omar Sharif, Julie Christie, Geraldine Chaplin and a slew of other actual movie stars. Directed by David Lean, with a haunting soundtrack from Maurice Jarre, Doctor Zhivago won 5 of the 10 Academy Awards it was nominated for, and is a must see for movie lovers around the world.

RSVP for you plus one guest at NYTFilmClub@nytimes.com. Please mention that you heard about the screening through The Valley Film Festival.

Posted by The Valley Film Festival at 9:30 PM

Check out my new social media site for film fanatics, we would love you to hype your festival and have a presence. We will blog about the festival and participant information- please reach out to kalli@lovecinema.com