If you consider yourself “in” the industry, then attending the Cannes Film Festival, or Festival de Cannes, is a must. After, of course, attending The Valley Film Festival. Fortunately, the two are months apart.

Yes, we understand that your credit cards are maxed out from your last production, and that you’re between projects, and like most of the industry, you haven’t worked in months. Trust us, VFF gets it. We’re all volunteers with various stages of work and project commitments, or lack thereof. That being said, if your presence at work/home can be spared for one week, attending Festival de Cannes is a must to revitalize your artistic soul and renew your industry contacts.

Worried about the logistics? Don’t. VFF will tell you how to do Cannes on a budget that even an unemployed screenwriter can afford. Really! With almost a year to go until the next festival, you, too, can Cannes.

In this post, we’ll focus on the application process.

Next, follow the Festival de Cannes on Facebook, Twitter, or via the festival's RSS feed to know when the accreditation process opens. And, when it does, apply as early as possible. Oh, yeah, and it’s free. Yes, a full festival, professional badge to the most prestigious film festival in the world is FREE. You have nothing to lose by applying.

Additionally, there are 1, 2, and 3-day passes, and Short Film Corner badges.

Most likely, you'll apply for the Festival badge. This is the badge for film professionals and it grants you access to the Palais des Festival, Marche du Film, Village International, badge-only hotels such as the Majestic and Carlton, Short Film Corner, and Official Selection screenings.

Just a few years ago, one had to snail mail a CV and physical collateral supporting professional claims. Now that festival accreditation is online, it’s pretty simple. You’ll be asked to supply a link to your credits or attach a PDF. You should link to your IMDB page or an online CV that best showcases your artistic talents. If you’re a freelancer, you should have your own website (not a Facebook page) or, at the very least, a LinkedIn profile.

You’ll also be asked to indicate where you’ll be staying while in Cannes. This seems like a trick question, right? Who knows where they’re going to stay four months down the road? Don’t leave this section blank. It’s our belief that if the Office of Accreditation sees that you have accommodation lined up, they’ll know that you’re already committed to the festival. VFF uses the physical address of the MMV Cannes-Mandelieu Resort, because it’s an affordable hotel we’ve stayed at before, and it's our trusted back-up plan if nothing better comes along. And by better, we mean something closer to the Croisette or near the beach. The MMV Cannes-Mandelieu Resort is an all-suites hotel, about 4 miles from the Croisette, and it offers free shuttle service to and from the Palais des Festival. It’s an awesome hotel and can comfortably sleep 4 in a standard suite.

Finally, you’ll be asked to leave a comment. Again, don’t leave this section blank. If you don’t have a specific question to ask, say something nice about the festival (it’s not hard) or mention why you want to attend. By saying something, anything, you're letting the Office of Accreditation know that you respect their time and the festival.

It goes without saying, but if your primary email address is something along the lines of “PartyGirl55” or “NFLKid007” @, you should probably create a free Gmail account, use your work email (even if you’re not attending on your company’s behalf), or ask a really good industry friend, with their own domain, to create a temporary email account for you.

Ok, let’s suppose you don’t have a short film to submit to the Short Film Corner, and you just received a rejection letter for the professional “Festival” badge. Now what? Chances are, the Office of Accreditation will soften the blow and offer you a Cannes Cinephiles badge instead. If your main goal is to soak up the sun and perhaps catch a film or two, go ahead and accept it. The Cannes Cinephiles badge was originally designed as a “locals only” badge and will not allow you to access the Palais des Festival, Marche du Film, Village International, etc. It will only allow you access to select Cannes Cinephile screenings, in select screening rooms, somewhere in Cannes. We’ve never been able to track down this screening room, so it’s off the beaten path for sure.

If you want more out of the festival, thank the Office of Accreditation for their consideration and clearly indicate that you do not wish to accept the Cannes Cinephiles badge. Be gracious and respectful. 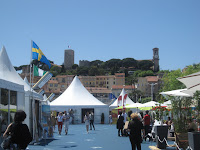 You can purchase a 1, 2, or 3-day pass for about 20 euros a day. The days are consecutive and you can only make the request once. A day pass will give you access to all of the areas covered by the professional Festival badge. If you’re in town for a week, you should wait at least a day to acclimate yourself to the festival before buying your day pass. If you know someone at the festival with a Festival, Short Film Corner, or Marche du Film badge, ask them to accompany you to the day pass office. You don’t need to have a “sponsor” to purchase a day pass, but having someone vouching for your professional reasons to be inside the Marche is a plus.  This is not the time to flaunt your credits or pull rank. Instead, use this moment to say you’ve made an appointment with XYZ company or have been invited to a Short Film Corner screening.

Now that you’ve been granted a badge, or have decided to go without one, we’ll cover logistics, festival must-dos (with our without a badge), non-festival activities, and more. We want you to enjoy Festival de Cannes as much as we do!
Posted by The Valley Film Festival at 11:08 PM