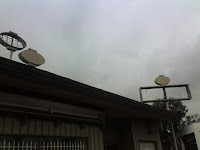 If you didn't already know, The Valley Film Festival is a huge fan of regional production. VFF encourages all filmmakers to look at their backyard a little differently and find something other than, well, a backyard.

Have an industrial setting and in need of factories complete with railroad tracks? Follow your nose down San Fernando Road. Perhaps your film calls for an orange grove? Head south on Oakdale, off Ventura Blvd., in Woodland Hills and there you'll find acres upon acres of citrus trees. Maybe you need something a bit more metropolitan? Check out Studio City's hustle and views. Looking for east coast fall foliage? A drive down Burbank Blvd. (west of Sepulveda) can double as the Vermont countryside with a little imagination. 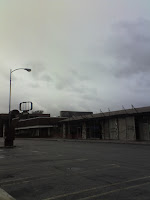 While on an official VFF mission (more to come on that later), we found what could easily double as a ghost town, or even an atomic site, in North Hollywood...Valley Plaza.

Once home to over 120 storefronts, anchored by Sears, J.C. Penney, and Thrifty, this was the busiest open air mall west of the Mississippi River in the 1950's and 1960's. Today, this 23-acre parcel on Victory Blvd., between the 170 freeway and Laurel Canyon, is almost empty.

Sears is holding its ground in the plaza on the north side of Victory, but the south side of the plaza is boarded up and begging to be a location in your next film before it's totally demolished for the sake of redevelopment. 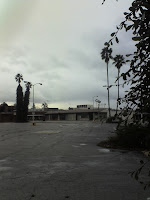 Quick! Put your thinking caps on, start writing, and grab your camera. For some inspiration, we found a great site that chronicles the rise, fall, and (potential) rebirth of Valley Plaza, and we took some photos too.

Let us know if you end up shooting at Valley Plaza or if you know of any unconventional locations nestled in the great (818) we should talk about.
Posted by The Valley Film Festival at 10:06 PM

They plan on demolishing the Plaza?
Its an outrage.